My Cats Are Fighting. What Should I do? 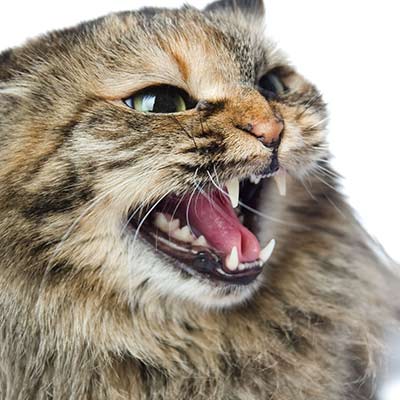 Many owners wish to provide a “friend” for their cats. Cats can become best pals, grooming each other, playing and sleeping together.   Unfortunately, sometimes two cats end up fighting instead of playing together. So why don’t some cats get along, and what can be done when the “friends” are “frenemies”?

Not Naturally A Fan of Groups

Humans and most mammals prefer to socialize in groups, either in order to hunt more effectively (as with humans and dogs) or for better protection (as with horses and cattle). Cats, however, are an independent species, preferring to hunt and live alone. Cats do engage in play behavior (especially as kittens), but may react aggressively if the feel threatened or feel the need to defend their territory. A cat’s territory may be as large as 20 city blocks. So, what do you do if your cat doesn’t want to share his turf in a house much smaller than that?

First, you need to be able to recognize the signs of conflict and identify which cat is the aggressor. Some conflict is quite obvious; cats may stalk each other and, if neither backs down, they may swat, bite, or wrestle. Often, conflict is much more subtle. The cat creating the conflict may simply approach other cats with head held low and tail standing on end and may stare at cats until they back away. Often, these cats deny other cats access to resources such as food and the litter pan. The “underdog” cat may be very stressed trying to get to its bathroom and food bowl without getting ambushed. This stress can even lead to health problems.

Once you’ve identified that your cats feel threatened by each other, add a separate set of resources (food bowl and litter pan) for each cat, preferably in locations where the cats can use them without being seen by other cats. This lets the cats avoid each other if they choose to without being deprived of an essential resource. Try to place these resources in locations with multiple directions to flee, so your cat won’t feel cornered. Since each cat prefers more “personal” space than the average house gives them and, unlike us, cats think three-dimensionally (ie. counters are separate living space from the floor in the same room), add kitty condos, boxes, to provide your cat vertical hang-outs. In severe situations, behavior-modifying medications may help reduce the need for the cat to assert itself.

P@sst Off! Urine as a Sign That Cat’s Are On Guard

Both cats in these conflicts may urinate in the house. Cats communicate by “marking” objects, either with pheromones released from rubbing their bodies against objects or by urine-marking. A cat may try to declare that the house is “theirs” by urinating (usually spraying against walls or other vertical surfaces). The stressed cat may develop cystitis (bladder inflammation) and urinate on floors or other horizontal surfaces. If either of these behaviors is observed, call Brookfield Animal Hospital. Treatment of urine marking is much more successful when initiated soon after the behavior starts and cystitis is a painful medical condition requiring treatment.